“The Spirits’ Book” was published in 1857 and marks the official birth of Spiritism, a spiritualist philosophy. It is the result of extensive research by Allan Kardec and others on a series of seemingly unexplained phenomena taking place during the 1850s in Paris — and a significant milestone in the field of human thought as it more clearly unveiles the relationship between the physical and spiritual realities.

In this revolutionary work, we find a new comprehensive approach to understanding our true nature and that of the world around us. It speaks to the constant need to investigate the world around us (science), to make sense of our findings (philosophy), and to apply them to our day-to-day living so as to improve ourselves and the world around us (ethics/religion). This approach is often referred to as the triple-aspect of Spiritism: the conjoining of Science, Philosophy, and Religion. Thus, “The Spirits’ Book” presents us with both the foundations of Spiritism as well as a great place from which to start or deepen our personal search for meaning and purpose.

The Making of The Spirits’ Book

To create “The Spirits’ Book”, Professor Rivail gathered and sorted through large amounts of information coming from different mediums. His genius lay in the creation of a scientific approach to validate this new information: he created “blind” experiments in which various groups throughout Europe would submit answers to questions he posed them. If similar answers to the same questions were given by different groups (which did not know each other), then they were likely to be true. Put another way, if the information could be “blindly” replicated, it was likely to be correct.

Congruent, validated answers were eventually compiled and organized into what become known as “The Spirits’ Book”. “The Spirits’ Book” was first published on April 18, 1857 containing 501 questions and answers. The second edition was published in 1860 and contained 1,018 — a testament to the ever-growing, ever-learning nature of Spiritism. The third edition — considered final and the one we use today — included minor revisions and numbered one more question to end at the total of 1,019 we know today. As an educator, Kardec also understood the importance of primary sources and thus chose to reproduce the answers from the spiritis verbatim, avoiding editorializing unless greater context would help. Finally, Kardec organized The Spirits’ Book into four parts to facilitate understanding: 1) Primary Causes; 2) The Spirit World; 3) Moral Laws; and 4) Hopes and Solaces. The result is an impactful work which begs the reader to reach its own conclusions about the facts presented.

Spiritism After The Spirits’ Book 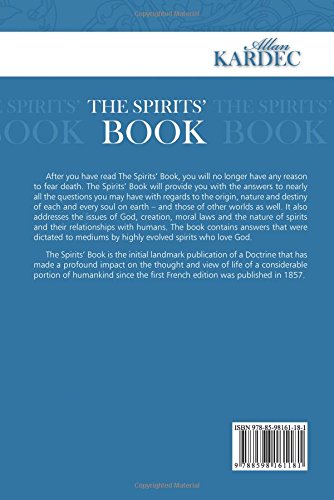 Although Spiritism started with “The Spirits’ Book”, it has certainly not stopped there. As a progressive body of knowledge, Spiritism too has continued to evolve and grow. Kardec himself would go on to edit and publish four other books through this cooperation with the invisible world before passing in 1869: “The Mediums’ Book” (1861), “The Gospel According to Spiritism” (1864), “Heaven and Hell” (1865), and “The Genesis” (1868). In the same manner, many others have continued to help generate more and more Spiritist content every after year.

Since the publication of “The Spirits’ Book”, Spiritism has grown into a global movement bridging science, philosophy, and religion into a new way of looking at life and the world around us – both visible and invisible. Its teachings continue to transform millions of lives throughout the globe and positively contribute to the making of a better world for all.

If you would like to read The Spirits’ Book, you may buy a copy here, at your local Spiritist group, or search your local library.

The Start of Spiritism

Kardec’s publications have sparked a growing global movement that has been transforming millions of lives throughout the world for more than 150 years.
The 5 Basic Books

Learn more about the 5 basic books of the Spiritist “Codification”: The Spirits’ Book, The Mediums’ Book, The Gospel as Explained by Spiritism, Heaven and Hell, and The Genesis.
Who Was Allan Kardec?